Next Up: 'The Stutes' of Histon FC
Crows v Histon FC
Kick Off: 3pm, Saturday 28th September 2013
FA Cup with Budweiser 2nd Qualifying Round
So we are back to FA Cup action and the long, winding road to Wembley! This round we welcome our near neighbours the Village People of Histon to Garden Walk in what some of their fans are billing “Royston’s Cup Final!” Well come 4:45pm we shall see, never underestimate the underdogs, just ask Leeds United, Swindon and perhaps not Swansea.

Look out, Histon are coming!
Originally split between two villages named Impington and Histon, over the years they have intertwined and most folks are unsure where one starts and one finishes! As they are known as Histon, I will talk a little about this part of the equation.
The oldest part of Histon is Gun’s Lane which is named after a family that lived there, now just a simple bridleway, it was the main road into the Fens and the Isle of Ely, yep Ely is an island, but they have not declared war on us just yet! The most famous person of Histon is a chap called Moses Carter and he is depicted on the village sign. Big C as he affectionately known by absolutely no-one was over 7 feet tall and carried a stone around him all day. He obviously enjoyed his shredded wheat. 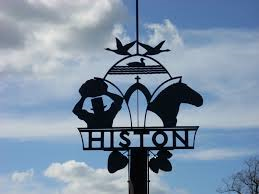 Real growth did not come to the village until the railways came to the area with the expansion of the Eastern Counties Railway Company. Steven Chivers seized this opportunity by purchasing an Orchard next to the line that gave him access to London and the Northern Counties of England. After noticing the demand for Jam the two Chivers sons persuaded their father to diversify and they opened the Victoria Works jam factory which was a huge success and led them into the production of Lemonade and jellies. By the outbreak of war the company owned most of the farms in the area and employed over 3,000 people. The factory and farms were sold to Schweppes in 1959 although most of this was bought back by the family in 1961.
In the 1980’s saw the end of the old factory and the company which was by now subject of a management buy out and renamed Premier Foods opened a £5million factory for the making of peanut butter and honey. What a nice combination!
The railway played a huge part to the economy of the area with over 80 trains a day stopping at Histon Railway station. This played havoc with the local roads and led to the building of the bridge road by-pass in 1963. In 1970 passenger services were withdrawn as part of the Dr Beeching cuts. An interesting fact about this, when carrying out his survey the man with a clip board counted 8 people boarding or disembarking at Histon station which led to the decision to cut services here. Only problem with this is that he turned up at 22.00hrs at the quietest point of the day! A mistake maybe? 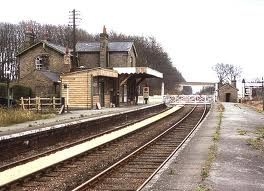 Histon Railway Station: A Crying Shame
HISTORY
Formed in 1904 as Histon Institute FC, hence the nickname the “Stutes” rather than the Imps or the Villagers, they played in the Cambridgeshire Football League. John Chivers who was the Chairman of the Jam making factory by that name donated a field covered in Roses for the club to play on. This is depicted in the club crest. They do like to depict things in this part of the world, perhaps it is easier to do this than write words?
They joined the Delphian League in 1960 but when this disbanded after 3 years they joined the Athenian League. They caught a case of itchy feet and in 1966 joined the Eastern Counties where they remained for 25 years.
They were winners of the Jewson League cup in 1990 but then lost key players Lance Key and Shaun Sowden to Sheffield Wednesday and the exotically named Giuliano Mairorana to Manchester United. A picture of his transfer adorns the boardroom at Bridge Road. 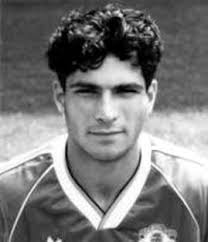 Giuliano Mairorana: A Histon Legend but forgotten by Man Utd
After relegation in 1995 the club re-organised and after the departure of Graham Daniels to Cambridge City, Simon Allen took the reigns and guided the Stutes back to the Eastern Counties Premier Division.
The 21st Century saw a rapid change in Histon’s fortunes. With Cambridge United Leg-end Steve Fallon in charge, the club finished 2nd in the Southern League Eastern Division and promotion to the Premier League. They won this at their first attempt and with it Promotion to the Conference South.
2006 saw the club finish in the Conference South Play-Off spots and after defeating Farnborough FC 3-0 they were defeated in the final held at Stevenage’s Broadhall Way by a 2-0 score line. I went that day and would remark on the fantastic turn out from the village including many Cambridge United fans that went to support a local side. This season saw a remarkable run in the FA Cup before bowing out to Nuneaton after a replay in the second round. They also defeated a very poor Cambridge United side 5-0 in the FA Trophy.
History was achieved in 2007 after our very own Ada Cambridge fired an 89th minute winner against Welling to send the over achieving Stutes into the promised Conference National Land. That year Neil Kennedy scored his 300th Histon goal.
Their first season in the Conference National saw a 7th place secured with several records broken including a first ever televised game against Oxford and a record attendance against Cambridge United with 3,721 seeing a win for the home side.
Their second season was the year in which they gained National headlines. By November they were sitting pretty at the top of the league with the Football League looking a real possibility, however as the more experienced sides around them kicked on, they eventually finished in 3rd place before being beaten by eventual promotion winners Torquay United 2-1 on aggregate. That same season they caused one of the FA Cup shocks in recent history. After defeating Swindon Town in the first round, the mighty Leeds came to town, well the village and were defeated on a mud splattered pudding of a pitch 1-0. Swansea did not make the same mistakes as the Leeds and dispatched Histon 2-1 in the third round.
Things started unraveling after this with Gareth Baldwin leaving the club after 17 years and being replaced by Royston business man Tony Roach and in January 2010 the almost unbelievable decision came to sack Steve Fallon and he was promptly replaced by ex Cambridge United assistant manager Uncle Festor, sorry Alan Lewer. They were then fined £5,000 for submitting misleading financial information and then appointed David Livermore as manager. They were relegated at the end of the season finishing bottom despite several good performances.
Their first season in the Conference North (Yep, Crows, thanks to the wisdom of the FA they are considered a Northern outpost!) they finished in 16th place and followed this up last year with a 19th placing.
Their Season So Far
Many people’s favourites to go down and heavily, the bookies have been forced to relook at the odds given due to a fairly strong start. After an opening day 3-1 win against Colwyn Bay, some very good performances have been recorded against Gainsborough Trinity (2-0), Altrincham (2-2), Workington (3-1) and Harrogate (1-0). Their last two results have not been so good including a 1-0 defeat against Hednesford after a very, very poor refereeing decision (we are used to those now Crows) and a defeat away at Barrow (2-1). From my mate David Bayliss the Stutes were unlucky not to walk away with at least a point.
Ones To Watch
A very talented side has been put together by Brian Page and we will start at the back.
23 year old Remy Clerima joined Histon in July 2010. Frenchie as he is French has been a hit with the Stutes faithful with 8 goals in his 108 appearances. Influential and calming he is also the club Captain. 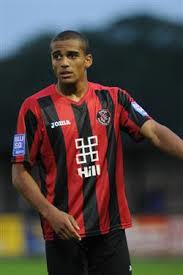 Oh La La Remy…..
In the midfield engine room we will find Nathan Hicks. On the books of Leicester City he was signed from Kettering Town. Highly rated and deadly from the set piece he has found the back of the onion net 3 times so far this campaign.
The Crows will really need to on their guard against the highly experienced Lewis Taffe. This lad seems to be have been around for ages, you would be wrong though. Just 21 years of age and very highly thought of by the Stutes, he has progressed through the youth ranks and is now a regular. Taffey has been on the radar of Wolves for a very long time (wish they would make the move and sign him, from being a Wolves supporter perspective!) In regards to goals, he was in double figures last season and expect him to be a menace at fortress G.W.
The Man In Charge
In this writer’s opinion, he deserves a medal after inheriting a disorganised rabble quite frankly. He was the assistant to David Livermore for two seasons from 2010-12 before rejoining the Stutes in December 2012 as assistant to Naser Relizani. With the Stutes fast becoming the basket case of local football he accepted the manager’s job in May 2013. P-Man is highly regarded in non league circles for forming a great football side on very limited resources. Some very promising signings and with his excellent coaching skills, the future looks bright for the Village People after some questionable few years.
Have We Met Before?
Many times in friendlies but this is the first competitive fixture since our FA Vase success in 1978. We won that day 2-1 at Garden Walk, hopefully history will repeat itself and send us on the road to Wembley that I dreamt about! We will defeat Leeds in the 3rd round before meeting Swansea and then Manchester United, all at a pudding of a pitch at home!
Jez Izod