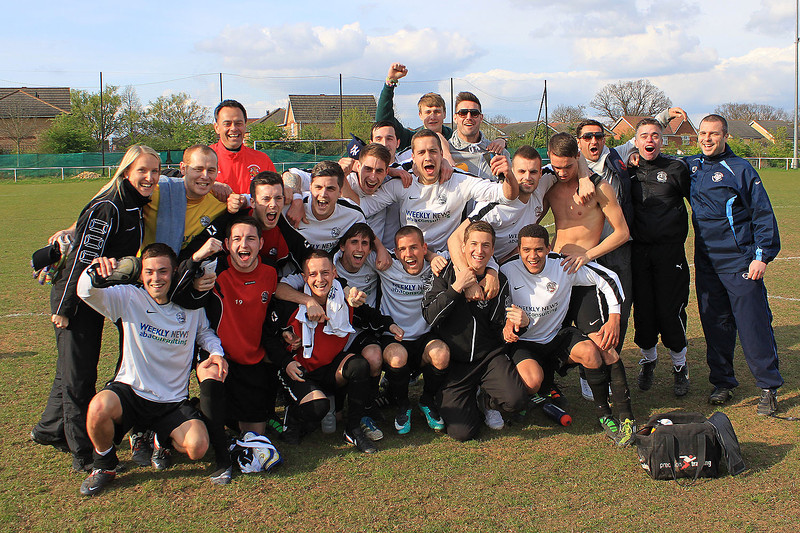 Royston Town were crowned South Midlands Premier Division Champions on Saturday afternoon with a narrow 1-0 victory at Oxhey Jets surpassing the 100 point landmark and with nearest rivals Dunstable Town losing by the same scoreline at home to Hillingdon Borough Paul Attfield's side have achieved a second promotion in four seasons and will play Step 4 football next season.

A fine run of just one defeat in twenty outings has broken the resilience of their closest rivals who could not quite match The Crow's consistency and although the free flowing football of the first half of the season has been replaced with more dogged, ground out performances just recently the results have been maintained and the statistics have to be respected and admired.

This was the third time Royston had visited Oxhey Jets in the last three months having already lost and won an encounter in various cups and with Jets having an important Herts Senior Cup Final against Bishops Stortford on Wednesday evening their obvious priority for that fixture saw them rest a number of their normal personnel. All at Royston wish them well in the prestigious competition final on Wednesday.

Paul Attfield had his normal problems of late with a large absentee list. Will Norris, Martin Standen, Lewis Endacott and Kaan Fehmi were all suspended. Jack Friend was injured, Ryan Redford unavailable and John McGrandles played despite just passing a pre-match fitness test.

The first half was tentative with both sides offering sporadic moments of quality but largely the half was full of mistakes and misplaced passes on the hard end of season surface.

With Royston looking comfortable they almost conceded on ten minutes when a lofted ball in the box was misjudged allowing Putnam a free shot at goal that Damian Williamson superbly tipped wide. A similar mistake moments later allowed another shooting opportunity that this time was put just wide.

At the other end a dipping left footed half volley from Luke Robins brought a full length save from Mark Jessop in the Oxhey goal and Ryan Lockett also had a good chance from Robins' cut back but couldn't quite get good enough control of the ball and shot wide from eight yards. In terms of chances that was about it in a game that really needed some vigour.

That arrived in the second half which exploded into life within two minutes when a vicious 30 yard effort from a Jets player smashed the face of the Royston crossbar and despite the let off The Crows were better in the second half and began to get good control of the game.

The visitors began to put together some more constructive football that caused problems and created chances. One such move ended with Lockett crossing for Robins whose angled volley was blocked by the keeper's legs with Tom Malins follow up hitting a defender and flying off for a corner. From the resultant corner on 55 minutes John McGrandles brought a fine save from the keeper with the ball coming back off McGrandles and into the net.

Lockett then brought another superb full length diving save from the home stopper and Malins couldn't quite convert a low Robins cross from six yards. Luke Robins probably then had the chance of the half to kill the game off when he broke clear in the box but shot wide with only the keeper to beat.

The Crows were then rocked on 82 minutes when Jason Beck was adjudged to have fouled a home forward in the area when competing for a high ball. However Damian Williamson pulled off a fine diving save from the resultant penalty to protect his side's lead.

Matt Standen should have been awarded a penalty late on when he broke clear and was pulled back by the last defender in the area but inexplicably the referee waved away incensed protests.

The clock ran its course and when the news came through of Dunstable's home defeat, the team celebrations started in the middle of the pitch as The Crows completed their main goal of the season with two games remaining.