Royston Town are pleased to announce the signing of Scott Bridges from Hayes & Yeading United. Scott, a tenacious and hard working midfielder, is no stranger to the Crows faithful having spent 5 seasons at Garden Walk before moving to Hayes & Yeading ahead of last season. 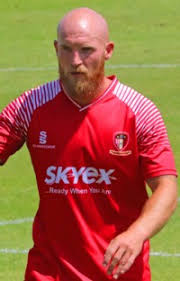 Chairman Steve Jackson said ““Getting Scott back to Garden Walk is a massive coup for the Club. Having won the title with us in 2017/18 he then repeated the feat with Hayes & Yeading last season. He was recently named in the Bostik South Central League Team of the Season and was also selected as the leagues Player of the Year. We know exactly what we are getting with Scott – energy, leadership and goals. What more do you want?”