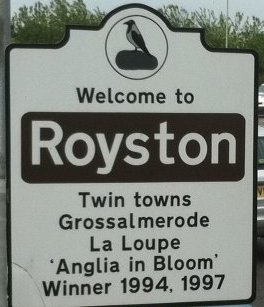 At Home With The Crows – Weather Permitting!

We are now in the business end of the season with games coming up thick and fast. A few words about Saturday, well done to a depleted squad. It was a physical game but sometimes winning ugly is the way to go!

Anyhow we return to midweek cup action and the first round of the Hinchingbrooke Cup, sounds like a quaint little village in deepest darkest Mid Sommer. You know the program, the murder mystery thingy, where about 12 people get butchered each episode. Thank God I don’t live there!.

Well we welcome Blackstones to Garden Walk. Another quaint sounding village, but you would be wrong. They are from the beautiful town of Stamford. Used to have a girlfriend there many years ago. Perhaps she will be coming along to the game? I wait with baited breathe. Let’s talk about Stamford though. The town is on the River Wellend in Lincolnshire and is best known for its fantastic stone built houses and bridges that adorn the town. Really Crows, it is a lovely part of the world.

Stamford is regularly used for filming and has appeared in the Da Vinci Code and Pride and Prejudice. Unfortunately it is also a regular destination for Bargain Hunt!!!

Bull running is most famous in these parts….cue the tumbleweed rolling past. Actually this is a festival that occurred every 13th November. The locals would chase a poor harmless bull through the town until it reached the Meadow. Here they would slaughter it and the meat was provided to the locals. Enough to turn me veggie! Anyhow, this practice stopped in 1839. I wonder if Stamford gave birth to the phrase “Bull in a China Shop?” I will have to investigate!

Famous people from the town include Sarah Cawood of “the girlie show” fame. Yep, I’ve never seen it either, perhaps the clue is in the title for its main audience. Something for the lads now, Tom Ford from “5th Gear” fame is from these parts.

On the music front, the town gave us Nigel Sixsmith of “The Art of Noise”. I still have three of their albums on tape. I shall convert them to CD and play it over the tannoy on Tuesday night.

Originally named as the Rutland Ironworks, they played their matches on Ryhall Road and their main base was “The Half Moon Inn”. Like a lot of pubs, it is now an Indian Restaurant. I’ve eaten there, excellent cuisine. Shame about the beer though.

Their first recorded match was a defeat against Stamford Town reserves in 1891. Ah 1891, the year the Penalty Kick was suggested to the FA. Just like goal line technology, it was turned down due to “keeping the flow of the game natural”. So in 120 odd years we will be treating GLT as a normal thing, if the FA have allowed full implementation by then.

Blackstones as a name was founded in 1920 and named after the local engineering manufacturer, Mirrlees Blackstone. They played local junior football until entering the United Counties League Division 1 in 1984.

In 1988 they finished second in UCL1 and were promoted to the Premier Division, where they have remained ever since.

In 1998 they dropped the word Mirrlees from their title. The club enjoyed several mid table finishes, but were quite successful in local cup competitions. This proved so in 2004 when the club reached four cup finals. However the only one they achieved success in was the Lincolnshire Senior “A” Cup. I wonder if there is a “C” or “D” cups as they are my favourite…hehehe.

They finished in a safe but unspectacular 12th place last season.

Their Season So Far.

Currently sitting in 15th spot with 8 wins, 4 draws and 15 defeats, last time out saw the Stones secure a 2-1 win against fellow mid tablers Long Buckby. Previous to that they had been thumped by Deeping Rangers, Newport Pagnell Town and Spalding. Before saturday's moral boasting victory, they last tasted victory on the 6th December 2012 against Stewarts & Lloyd Corby (Sounds like a Chemist team to me?)

The exotically named and perhaps an Italian Stallion (cue floods of girls at Garden Walk on Tuesday) is Adriano Staffieri. Striker Adriano has started 15 times this season and has found the back of the net 5 times. Previous clubs include “That lot up the A1 Northern Star”, Bourne Town, Raunds and Holbeach.

Partnering Adriano up front is young Michael Nelson with 4 goals in 7 appearances. A signing from Rutland Rangers in 2010, “The Stones” have fended off interest from local rivals Stamford to keep him. Lively up front, he is not afraid to shoot from distance.

Another signing from Rutland Rangers is Robbie Pierce, formally a goal keeper! Robbie is a pacy winger, who allegedly has a great singing voice. We will find out on Tuesday if anyone has a recording device for the showers!

Darren Jarvis and Michael Goode recently resigned to take up managerial duties at "That lot up the A1(m)" Northern Star and the Stones have reacted quickly in appointing David Stratton as first team manager.

Big Dave is in his first job as a manager, he was previously a player with Yaxley FC. First game in charge saw his charges provide a perfect start with a 2-1 win over Long Buckby.

He may be in for a baptism of fire as PNS are rumoured to be keen to secure the services of several "Stones" players.

Usual checks etc. have drawn a blank. So again the challenge is on to prove me wrong. That pint of water still sits at the end of the bar. Might taste a little stale now, so just put some lemon in it.